SAI International School has been a strong participant in the Design for Change initiative since it was introduced in 2009. We joined as an DFC Ambassador School  encouraging other school in our state to take part in this bold venture. This programme empowers the  youth to identify social economical , environmental problems to which they  come up with piratical solutions with a deep impact. SAI International School has faithfull submitted a Design for Change Project every year starting from 2009. Our projects have made the top 100 list thrice, the top 20 list twice and top 4 once over the years. Design for change has a 4 step process FEEL, IMAGINE, DO and SHARE. Students must see and injustice imagime how it can be fixed , complete the task and share it.

Please take a look at our DFC projects over the years !

Since the year 2010, SAI has adopted schools for bringing about this holistic development. These Schools are adopted to address a gamut of issues over a period of time. Selection of school is based off of location and evident need of each institution. The areas include : Infrastructure Development, Teachers Training, Skill enhancement of students, Youth Leadership Development, Health, Safety and Security

SAI International School has developed the above check list and each year tries to implement a new element based off of the needs of each institution.  Each year students decide which element will be worked on and how it will be executed for maximum effect and long-term sustainability. The purpose of adopting Special Schools is to mainstream special needs students for personal and professional independence and create an enabling environment for them to study and work with dignity while creating empathy in our own students in a constructive and problem-solving manner. Over the past nine years, this project has empowered thousands of students and teachers and helped in the up-gradation of special needs schools in our local area. Our story will show the impact made in each institution by the students. Students first outlined this programme in 2016, compiling all the work done and how it could be carried forward in the future including the creation of the check list.

SAI International School is on a mission to implement 100 libraries into local underprivileged schools. Each year they raise funds during their flag ship events UNWIND and SAITED and donate a small well equipped library with 500 books, and almirah, and funiture when needed. SAIONEERS have pledge not to stop until all 100 libraries have been donated. They donate 3 – 4 such libraries annually.

SAIONEERS organize a social awareness campaign on different themes each year. This is done during International Youth Day. Over the years this event has had a great impact on the community and has covered topics on corruption, no smoking, anti- discrimination, no hate, anti- bullying and much more.  Skits, dance performance, music and interactive sessions with the audience has made the event a wonderful success. The entire event is planned and implemented by the students. 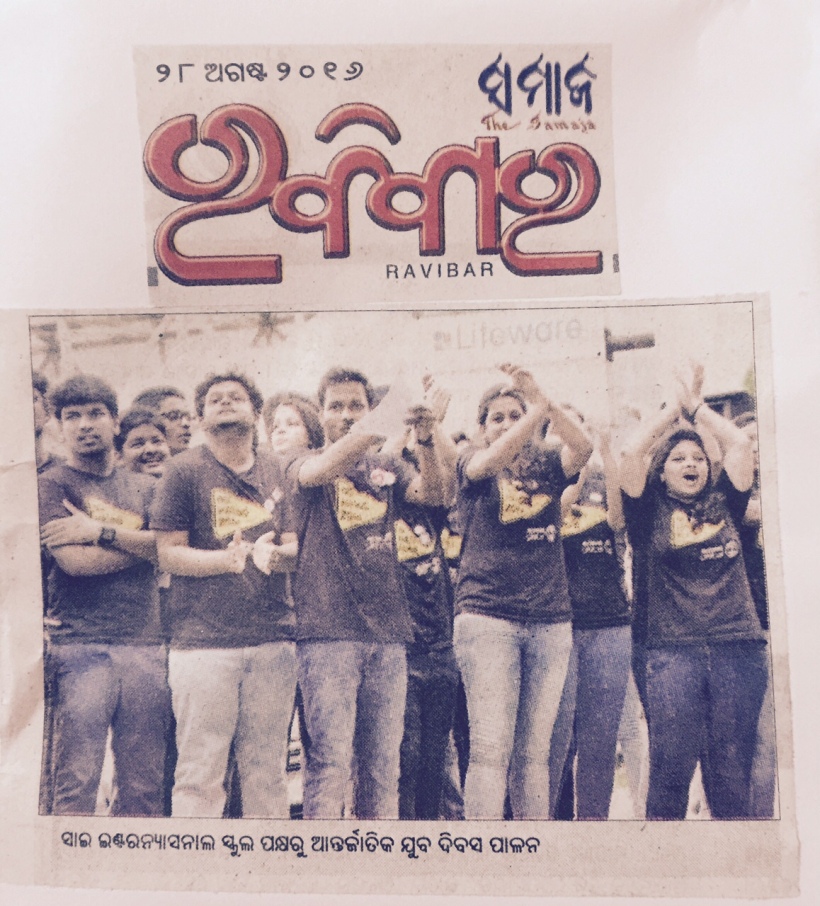 SAI International School DFC story 2014, We have been involved with the visually impaired for many years, even provided Braille Slates and Walking Canes one year for our friends. We found that the only method for visually impaired persons to read a story was with the use of Braille printed Books, Magazines, and Newspapers. We dreamt of creating another way that was more stimulating allowing them to use more of their senses and making the story really come to life. So the Sensory Wall Storybook was envisioned. After several visits to the Orissa Association for the Blind(OAB) which is home to over 700 visually impaired teachers , staff, administrators and students from all over the state of Orissa we decided to introduce them to a new idea in story telling practiced globally called a sensory wall. This wall stimulates the sense used by visually impaired persons specifically hearing and touch. We wanted to share an innovative way of storytelling through touch and sound bringing some smiles to the organization.

We teamed up with our partner school Winterbourne International Academy from Bristol, UK and created a Sensory Wall. The Wall contained the story of Goldilocks and the Three Bears. This amazingly simple story was written out in English and translated onto small recording boxes in Odiya the local language and most spoken by our visually impaired friends. A team of 20 students from UK and India worked for 4 days creating and implementing the wall. The entire planning was done by the students who broke up into 4 teams. The story was split into 3 parts and each piece placed on the wall was prepared by hand. 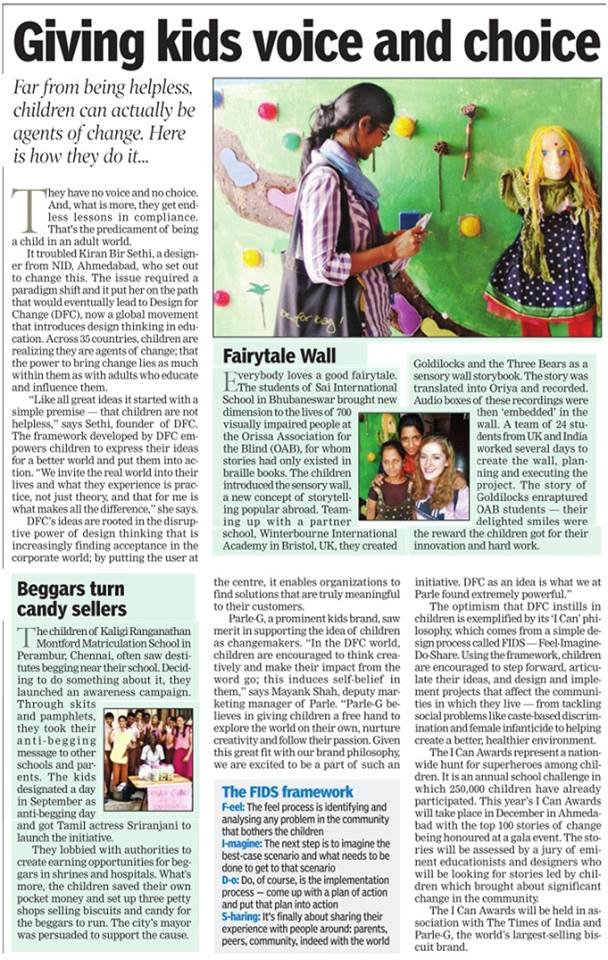 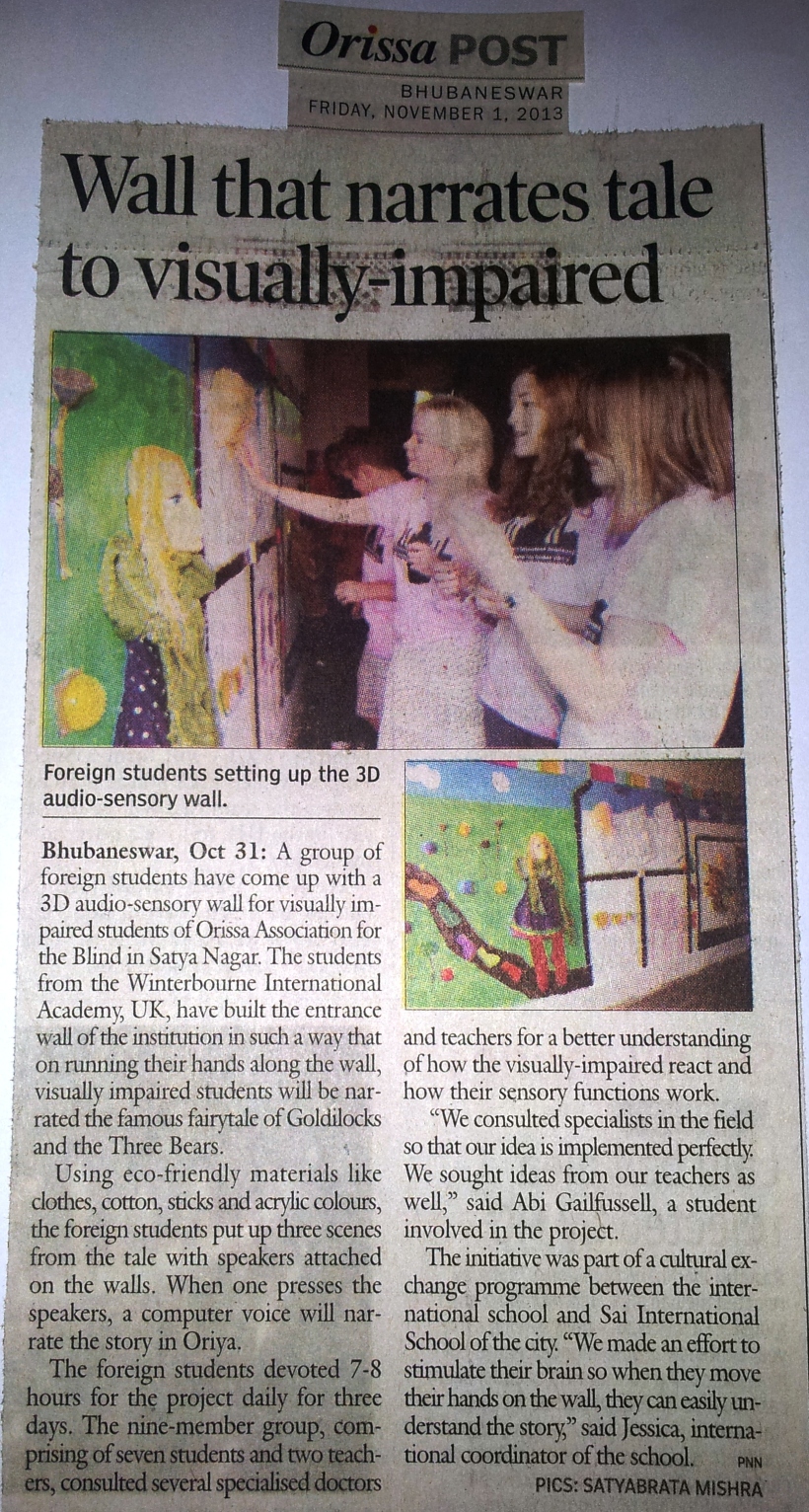 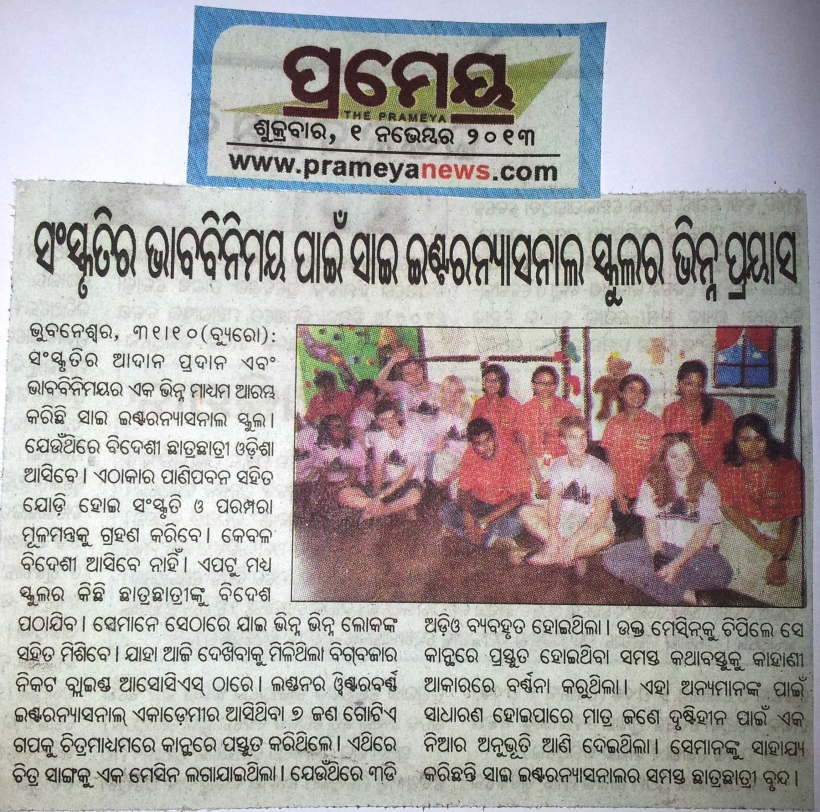 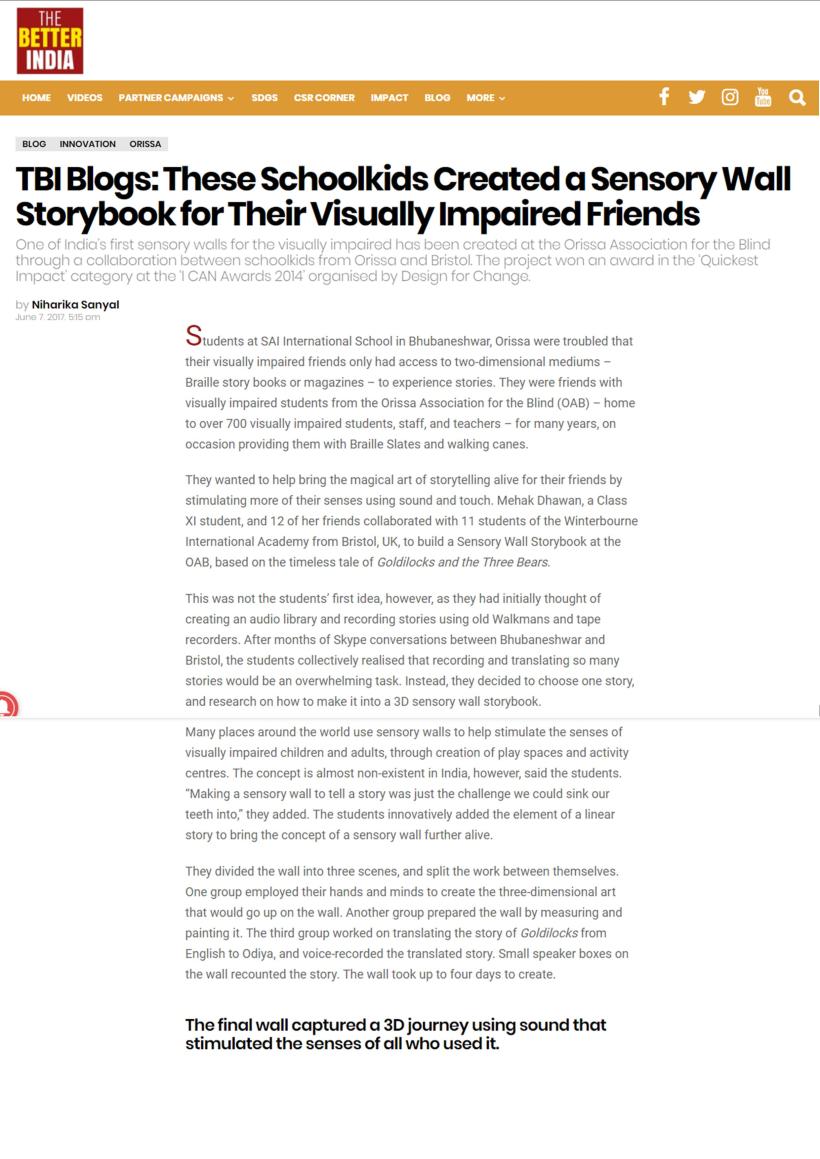 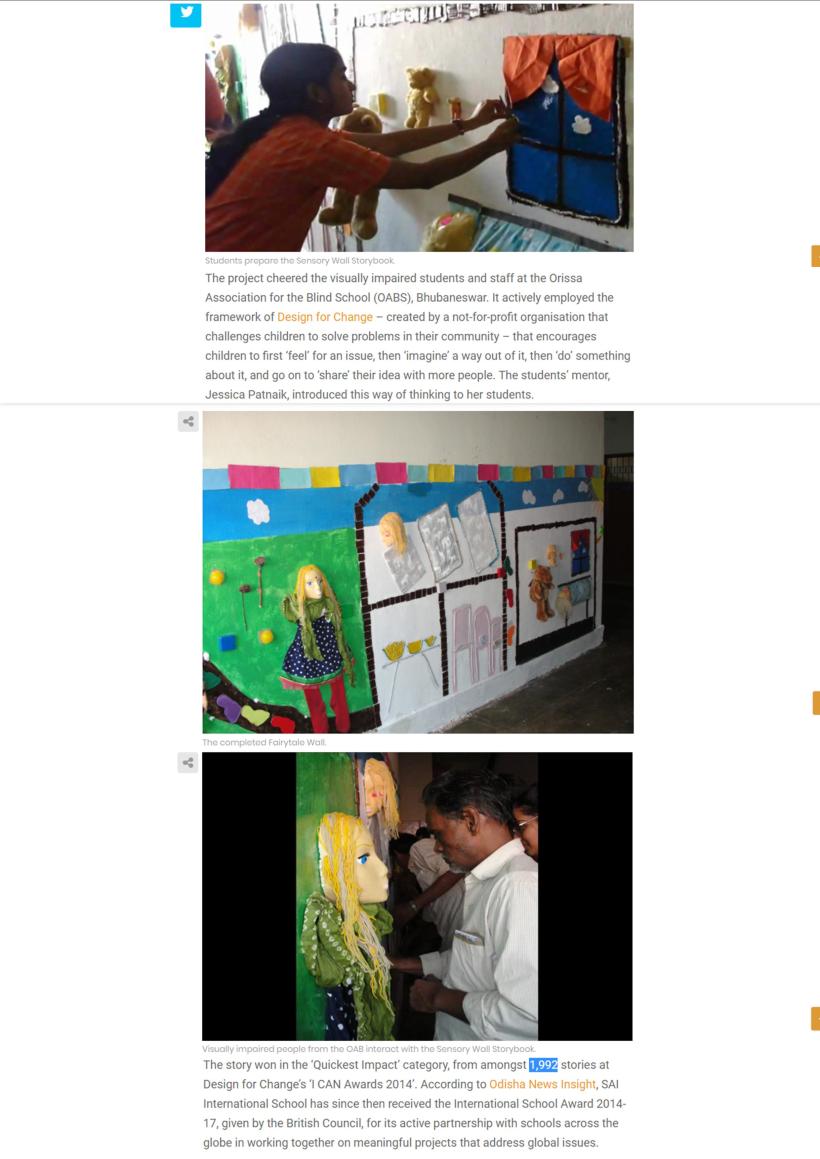 SAI aims to inculcate values in the students and to have empathy for their fellow beings. After a successful drive of donating a library to our adopted school in Patia under the DFC project Reading Rainbow, the SAI students wanted to go beyond that.

Taking this legacy forward the bighearted students of the School wished to bring joy on the faces of some children with hearing and speech impairment. They felt the necessity of a resource centre in the Shri Harsh Memorial School for the Deaf and decided to create and equip the School with large 400 visual teaching aids on topics related to their curriculum like big size colored picture books, story books and a projection system to watch teaching materials designed especially for these students.

Making a difference in someone’s life is the sole motto always at SAI. After the success of a bathroom installation at our adopted government school in Patia, Bhubaneswar, the students of SAI International School decided to go a step further and provide a much needed functional library to the pupils who are craving for one. The students of SAI thoughtfully brought up the issue and decided to take up an all school book drive and have the pleasure of donating a fully equipped library during the Joy of Giving week. They not only plan to reorganize a dilapidated room of the School with furniture, fixtures and paint the room to give a new look to it but also arrange for a very well planned stock of books appropriate for them to use. The students also plan to make this DFC project an ongoing activity to support the Govt School with reading sessions twice a month, in order to encourage reading habits in the children and help enrich their education. The SAI team also intends to guide the Patia students to maintain the library for long term sustenance. More and more books will be added to the stock as per requirement, year after year.

SAI International School continues to reach out to the community and the less fortunate. Today 40 SAI students boarded a bus in rout for the Bhima Bhoi School for the Blind carrying 40 folding sticks and 20 Braille Slates to give to their visually impaired friends. After a heartfelt reunion each child and staff member of the Bhima Bhoi School for the Blind was given a Folding Stick or a Braille Slate. With tear filled eyes all watched as the visually challenged students shared songs and spoke words of thanks to their SAI friends. This amazing initiative, Walking at Par, is SAI’s collaborative Design for Change project involving 2,000 SAI students and teachers. In which funds were raised by the sale collected waste paper and their self designed T-shirts. 319kg of paper waste was collected and sold and 1,000 T-shirts were printed. The conclusion of this project is yet to be seen as the funds from the T-shirt sales continues to come in and more folding sticks will be purchased and distributed to more schools for the Visually Impaired and to the Blind community in Bhubaneswar.

SAI Students made it their ambition to make a difference in the lives of not so privileged ones. They dreamt to make other people’s dreams come true. They wanted to extend a genuine hand of support to the students with visual impairment and help them step on the ladders of success, and make their lives colorful. They desired to create awareness in the students of the mainstream and build bridges between the two poles. SAI students gave a day out to over 100 visually impaired students giving them access to facilities at SAI International School, including the swimming pool, horse riding etc… In return our students went to the blind School for a reciprocal visit. The students of SAI International School blind folded themselves and experienced firsthand what it felt to have a visual impairment. This included learning basic Braille, playing cricket and chess, blind folded.

SAI International School is creating 100 libraries in local underprivileged schools in Bhubaneswar and the surrounding areas.

Show your support by participating in our school’s flagship events, UNWIND and SAITED through company sponsorships or by donating books at the school CSR desk in the office. If you have a business that would like to contribute or participate in one of our flagship events please contact the school.

Is a powerful yet simple idea where children use a Design Thinking Formula of Feel, Imagine, Do and Share (FIDS) to bring change in their own schools and communities, and in the process build 21st century skills of empathy, collaboration and critical thinking.

Daan Utsav (Joy of Giving) is a festival where people from all walks come together during one week in October to give their time, money, resources, or skills back to society.