Participating in DAAN UTSAV or The Joy of Giving Week is a must at SAI International School. Students have been organizing this event since 2010 and each year it grows. We focus on helping the less fortunate through all school donation drives. Then the items collected are given to different local organisations including local orphanages, Tribal Schools and special needs schools. 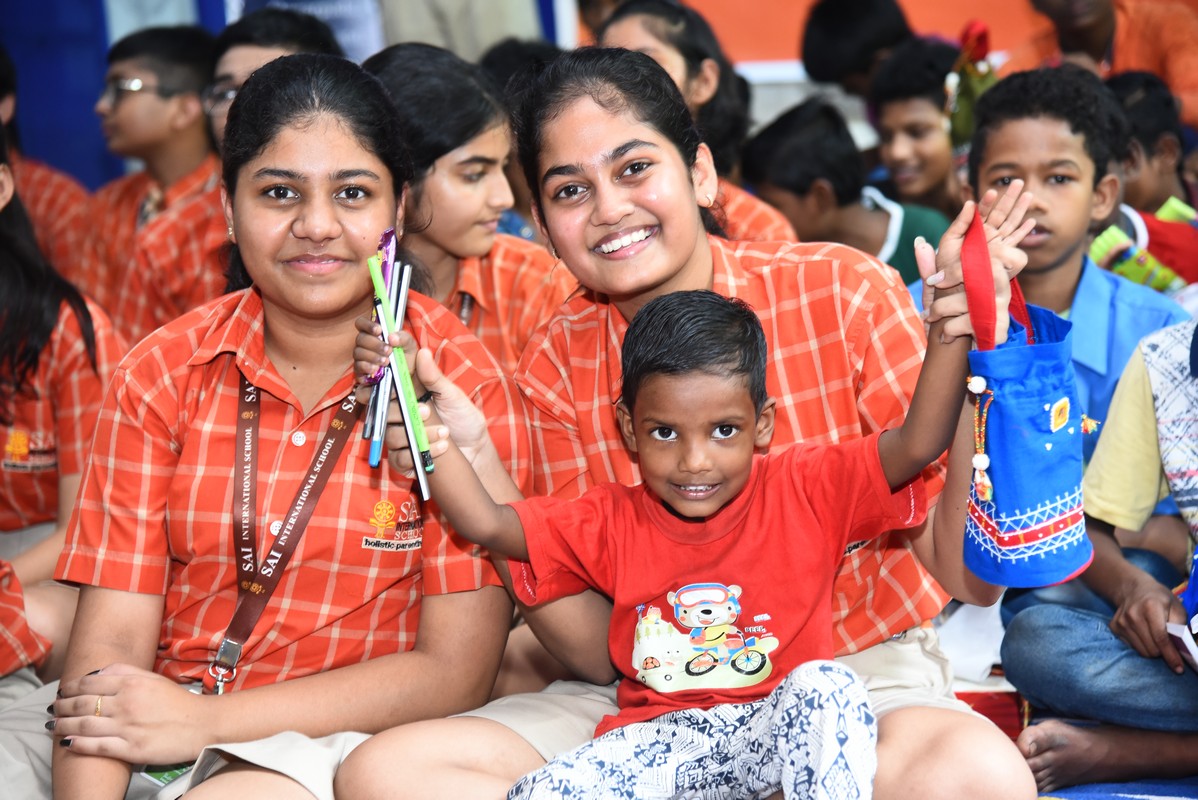 It was a joyful time for the 24 students of SAI International School and SAI International Residential School to spend some quality time with the 50 inmates of Swami Bichitrananda Kalyan Ashram, Cuttack on Friday, October 4, 2019. The happiness of the students compounded when they were informed that the Father of the Nation had also spent some time in the Orphanage during his tour to Odisha in June 1925.

The Ashram earns the recognition of being the 2nd Orphanage established in undivided India, the first one being in Lahore, Pakistan. It was established in the year 1925 by Swami Bichitrananda Das, an Advocate and associate of Utkal Gaurav Madhusudan Das. It is also considered as the oldest Orphanage of Independent India. Presently 50 boys in the age group of 5 to 17 years reside in the Orphanage.

On the occasion of the ‘Joy of Giving Week’, the students of Interact and Going Global Club of SAI International School along with three teacher coordinators, installed a library at Bhugin Ho Siksha Kendra at Godibari in the outskirts of Bhubaneswar as part of the “Mission : 100 Libraries” project. A 500 book library along with an almirah was donated to the school. This is the 20th library of  this sort that SAI International School has implemented since 2015 when the 100 Libraries project started.

The tribal students of Bugin Ho Siksha Kendra, in the outskirts of Bhubaneswar buzzed with life when expert Karate masters taught them a few vital tricks on self defense. The students played various musical instruments danced along with the students on October 7, 2016. The students were presented with School bags and essential stationeries and packed lunch boxes to celebrate the Joy of Giving Week or the Daan Utsav, the festival of philanthropy. This year it was celebrated through the project ‘Miles of Smiles’, to bring happiness to the children and teach them self defense.

SAI International School was an active community partner with Bhima Bhoi School for the Blind during the Joy of Giving Week in October of 2010 & 2011, and Design for Change, a National competition that encourages today’s youth to make a permanent change in their communities through social action projects. Both projects enhanced our school activities and helped our students grow with a lot of positive attitude and also gave them exposure to many good things happening all around them. The students of SAI not only shared their time but also their feelings.

In the year 2014,to keep the legacy of Joy of Giving intact, we collected “flip-flops for friends” and made e-bags from used t-shirts and donated  to various local orphanages in Bhubaneswar and inculcated the values of “sharing and caring” in our SAIoneers. An all school drive was organized for new umbrellas and blankets under the Project “A Shower of Warmth” for this year of Joy of Giving Week. Students of Interact Club and Going Global collected around 100 umbrellas, 50 blankets, 60 fancy wrist watches and donated to the slum students of Asha Ashwasan, Cuttack.

It was an overwhelming experience for the SAI Students to share juice, biscuits and toffees with the students. The students of Asha Ashwasan showcased their talent by many dance performances and Saioneers were equally happy to join them.

The take away from this act was that in giving we always receive !!!!

Every child should have the feeling of sporting a new pair of shoes. To keep the legacy of Joy of Giving intact, SAI International School students conducted an all school donations drive called “flip-flops for friends” bring in over 100 pairs of New flip flops to give various local orphanages in Bhubaneswar and inculcate the values of “sharing and caring” in our saioneers. SAI students donated over 100 pairs of brand new flip flops at the Ashraya Orphanage at Dum Dum. Placing a new pair of shoes on the feet of 85 underprivileged kids who themselves could not afford them. A Hygiene packet containing a toothbrush, tooth paste, comb, coconut oil, small packet of laundry detergent and a bar of soap was dispersed to each child as well. Also a small collection of over 100 used toys and one complete outfit for each orphan. Old Shoes of Ashraya Orphanage children and  over 100 pair of new shoes donated by the SAI students during Joy of Giving Week. Each child received a new pair of shoes, one at a time they came up and chose from the boxes, with smiles on their faces and happiness in their hearts.

This year SAI International School was enthusiastic to coordinate two activities because of the over abundance of giving from SAI students who donated 250 backpacks, 150 boxes of erasers, 200 boxes of pencils, 100 packets of sketch pens, 150 packets of biscuits, 75 juice boxes, 70 drawing books and 600 reading books towards the cause, placing everlasting smiles on the faces of the recipients.

On October 7, Humanity Redefined was put into action this was a joyful undertaking in which SAI Students visited “Ashraya”, an orphanage in Dumduma housing 120 inmates. They distributed biscuits, chocolates and juice boxes to the joyful sounds of song as the students from Ashraya serenaded them with song after song, one small child even recited a poem and the room filled with claps and laughter.

The second was Gift Compassion the following day when SAI Students visited their adopted Government Primary School in Patia that accommodates 123 students. They gave one backpack, eraser, pencil and drawing book to the entire student populace of Patia Government Primary School. SAI students also handed over more than 150 books to be placed in the Reading Rainbow Library as an addition to the already existing 500 that were donated last year as part of the Design for Change project. They also conducted a delightful story telling session and shared a memorable book called “The Little Lighthouse Keeper to the Rescue” then gifted it to the library on a permanent basis. “Translating the story from English to Odiya was a challenge but the delight on the faces of the Patia students while they listened and looked at each page was a great experience.” Arnav Mishra class VIII. The entire two days of giving was heavenly and one SAI students shared “watching a little boy receive his first backpack and seeing the happiness in his eyes, a sense of pride even, was the most memorable moment for me” said Pratikshya Mishra class VIII. These moments are life changing for every student involved; when giving from the heart is your focal point then only happiness can follow.

The biggest lesson learned during the Joy of Giving week this year was that in giving we always receive.

DAY 1 – Toys are US : The students got into the spirit of giving by organizing a toy donation drive. Students were asked to donate at least one toy on this occasion and as many as 500 toys were collected. These toys were donated to the “Jeevan Jyoti Ashram” which is a home for orphaned and homeless children.

Day 2 – The Book Benefit: The entire student community of the school actively participated in the book donation drive organized by SAI International School. Students were asked to donate at least one book on this occasion (story books in English, Hindi or regional language). More than 600 books were collected through this activity. These books were donated to the “Bakul Foundation Library”

Day 3 – The Clean Campaign: Students of the SAI International School organized a cleanliness drive at the “Baramunda” Bus stand as part of the Joy of giving week. Student volunteers cleaned up the bus stand and distributed awareness leaflets to the passengers present at the bus stand. This entire activity was carried out in the presence of the Mayor of Bhubaneswar who was there to encourage the students.

Day 4 – Joy of Going Green: Clean Bhubaneswar, Green Bhubaneswar was the motto of the SAI International School when it organized a sapling distribution drive at the Orissa Secretariat. Students of the school distributed more than 1000 “neem” saplings at the secretariat to the staff and members.

SAI International School is creating 100 libraries in local underprivileged schools in Bhubaneswar and the surrounding areas.

Show your support by participating in our school’s flagship events, UNWIND and SAITED through company sponsorships or by donating books at the school CSR desk in the office. If you have a business that would like to contribute or participate in one of our flagship events please contact the school.

Is a powerful yet simple idea where children use a Design Thinking Formula of Feel, Imagine, Do and Share (FIDS) to bring change in their own schools and communities, and in the process build 21st century skills of empathy, collaboration and critical thinking.

Daan Utsav (Joy of Giving) is a festival where people from all walks come together during one week in October to give their time, money, resources, or skills back to society.